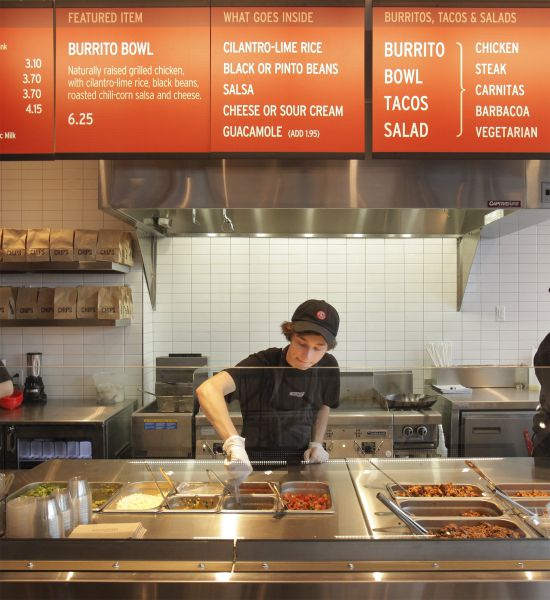 I’ve never fully understood the cult of Chipotle. That might be because I’m a fancy food writer who eats foie gras for breakfast… or it could be because I’ve lived half my life in Southern California where every single corner taco stand serves an amazing carne asada burrito.

It’s not that I dislike Chipotle’s food, it’s just that eating there never comes to mind when I’m hungry.

That’s not a huge criticism (it’s downright soft compared to the heat that Yelpers throw at the company). Having been around the food industry for a long time, I can say with certainty: Scale is a tough thing to manage. Scale paired with sustainability — which is what Chipotle is attempting — is even tougher. My own favorite Mexican food spot (in the U.S.) might not hold up well with 1,500 locations and a bunch of frazzled teenagers slinging the guac.

Regardless of my personal tastes, I have to credit the fast casual restaurant for cracking the code of mainstream appeal — like the Cheesecake Factory at the turn of the century and P.F. Chang’s in the mid-2000s, Chipotle has managed to become a major chain that people giddily obsess over. There is a “cool factor” — a big part of which comes from the company’s focus on smart sourcing and ecology.

The trouble here is that the food-obsessed public is fickle, and while a bad review can sink a fine dining restaurant, a whole pile of E.coli cases (which later seems to be under control only to bloom all over again) can seriously mess things up for a fast food Mexican joint. Just ask Taco Bell. After a 2006 outbreak due to tainted lettuce, sales for the entire company flagged — and this downturn persisted for five-straight quarters.

The fact that this latest bout of illness affected a college basketball team gives the news an extra viral push, much like the norovirus itself (which was responsible for the 80 cases of illness). Bottom line: Chipotle’s PR team is having a rough couple of weeks and is certainly worried about the loss of public goodwill.

Business Insider suggested that Taco Bell offers a good case study, but there are some big differences. Taco Bell never benefited from the cool factor that Chipotle has, and with tons of interesting fast casual concepts standing in line to be the next Chipotle, the long term loss of public adoration might be worse than the (relatively) short term loss in sales.

For a company that is branded as being at the forefront of maker culture and the sustainable food movement, this is a big threat.

The final net effect on Chipotle is yet to be seen, and because I don’t fully connect to the food, it doesn’t worry me too much either way. What I amtroubled by is the fact that the E.coli outbreaks might give people the idea that sustainability in farming and local sourcing won’t work at scale.

The company’s annual report even says:

We may be at a higher risk for food-borne illness outbreaks than some competitors due to our use of fresh produce and meats rather than frozen, and our reliance on employees cooking with traditional methods rather than automation.

Already, Chipotle is making it clear that they’ll be looking very closely at supplier relationships and has scrubbed messaging about local suppliers from their website.

“We have elevated requirements for all of our produce suppliers (chiefly in the area of testing of ingredients), and we are not sure that all of the current local suppliers will be able to meet those elevated protocols,” Chris Arnold, a spokesman for Chipotle, wrote to Bloomberg Business earlier in the month.

Evan Marks, founder of The Ecology Center (who, full disclosure, has partnered with Chipotle), doesn’t see these problems as a reason for the brand to pivot away from their stated ideals.

“As someone who’s worked with them, I really do believe that their longterm vision is a powerful one,” Marks told me on the phone. “The fact that they’re integrating the real conversation of sustainability into mainstream society is a good thing. They’ll have to rebuild trust with partners and purveyors in those markets — because this is a serious issue — but I feel certain that their commitment to the environment is withstanding.”

Most of all, Marks hopes that Chipotle’s struggles won’t give other chains pause when considering whether to focus on ecology.

“There are clearly some serious challenges to a sustainability-driven supply chain,” Marks continued, “but we can’t lose momentum, either. We have to solve the problem of creating abundance in the food chain in a sustainable way. There’s not going to always be a clear pathway — the system needs to be able to grow and evolve.”

As someone who isn’t a huge fan of Chipotle’s food, but is absolutely in love with their ideals, I hope Marks is right. I’m rooting for them to fix whatever is broken, but stay on the sustainability track. With luck, other brands (maybe a ramen place that sets up shop near my apartment?) will follow suit.