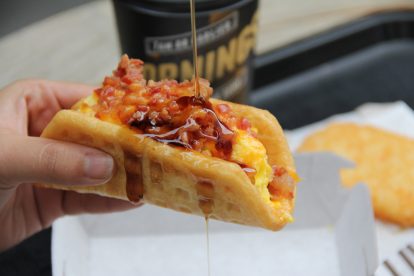 Breakfast: it’s what all the cool kids are offering these days. In order to keep up with the crowd Taco Bell is amping up its breakfast efforts, with a new “Morning Value Menu,” offering most items for $1.

Taco Bell has had breakfast items since 2014, but in order to keep up with the morning rush, it’s switching out some items and offering new, cheaper options.

Included on the menu are 10 breakfast items, some of which are new, for $1 each.

“When we first launched breakfast in 2014, our goal was to give our consumers classic breakfast tastes — in a uniquely Taco Bell way,” Marisa Thalberg, chief marketing officer for Taco Bell, said in a statement. “Now, we’re launching our new $1 Morning Value Menu to give people a terrific array of breakfast options they want, all at this incredible price point.”

The fuel behind this new breakfast fire? Taco Bell says it wants to offer customers cheaper items, but the fact that McDonald’s is having such success in the breakfast arena likely isn’t going unnoticed, either.

Other additions to the breakfast menu board: Mini Skillet Bowl with seasoned breakfast potatoes, scrambled eggs, cheese and pico de gallo in a bowl; Breakfast Soft Taco, a flour tortilla filled with scrambled eggs, bacon or sausage and cheese; and Sausage Flatbread Quesadilla, which is a grilled flatbread filled with three cheeses, sausage, and scrambled eggs.

Still on the menu: the Grilled Breakfast Burrito, Hash Brown, and Cinnabon Delights. There are a few casualties, however, in the interest of time — as in, how long it takes to prepare the items — the Biscuit Taco and Country Breakfast Crunchwrap with Gravy.