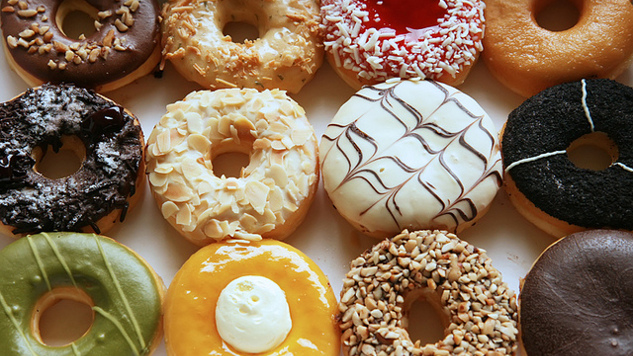 A few weeks ago, a friend mentioned that it was National Doughnut Day, and then paused before asking “didn’t we just have one of those?” I nodded, not really knowing when it had happened, but confidant it had not yet been a year since the last doughy holiday. A quick Internet search revealed that there are in fact two Doughnut (or Donut) days, the first Friday in June and November 5th. Something about this made the holiday seem less official to me, not that I have any qualms with eating a donut or two any day of the year. How did these “food holidays” come about, anyway?

The more I considered this, the more food holidays seemed to pop up—National Taco Day (October 4), National Beer Day (April 7), National Peanut Butter Day (January 24). Friends on social media posted about celebrating Pie Day, Pizza Day, and Mac and Cheese Day. It seemed like every day was an arbitrary food holiday, and every day I was being asked to make, buy, and eat a different food item. As someone who loves food but doesn’t love being told what to do, I was conflicted. Do I bother celebrating? Or do I cook whatever the hell I want?

Obviously, I cook whatever the hell I want, but that didn’t stop me from digging deeper into the origins of food days. Like most holidays, they are decreed by some sort of government official—a governor, mayor, congressman, or the president himself—either as a proclamation or commemorative holiday. But they actually start with, you guessed it, a marketing department. By and large, food holidays are thought up by a company’s PR or marketing department, and pushed through either a lobby group, association, or some other means. Peanut Butter Day was started by the National Peanut Board, as was Peanut Butter Cookie Day (June 12) and Peanut Butter Fudge Day (November 20). The National Peanut Board really gets around. Some of them were only meant to be commemorated for a single year, but have stuck around for one reason or another. All of this also applies to food-themed months, like National Honey Month (September) and National Grilled Cheese Month (April).

Before you lose all hope in food holidays, some have more noble, or at least interesting, origins. National Beer Day (April 7) celebrates the end of Prohibition, when people lined up the night before so that they could legally be served beer at the stroke of midnight. Donut Day was started by the Salvation Army during the Great Depresson to raise money and commemorate the female volunteers who brought comforts from home, including donuts, to soldiers on the front lines during WWI.

As someone who loves food but doesn’t love being told what to do, I was conflicted. Do I bother celebrating? Or do I cook whatever the hell I want?

And then some food holidays are just made up by some guy. Tater Tot Day (February 2) and a number of others were literally made up on a whim by food writer and social media whiz John-Bryan Hopkins. The fact that trending “holidays”—which PR people and food bloggers everywhere shout from the mountain tops—are simply the favorite junk foods of a guy in Birmingham simultaneously gives me hope and makes me sad. Who is he to decide? But, at the same time, who is anyone to decide? At least he isn’t from the Ore-Ida marketing department, he simply loves tater tots like a true American.

What I’m trying to say is that you, too, can have your own food holiday. All it really requires is some passing around on social media, causing enough people to celebrate. Then the following year everyone will have heard of it and think that it’s always existed. The only trouble is thinking up a food that’s worth celebrating that doesn’t already have a day on the calendar, since literally every day has at least one food to celebrate. It’s totally arbitrary and basically meaningless, but it’s also just a food holiday. Who cares, really? If it’s an excuse to eat a corn dog and feel festive (March 22), then great. No need to buy anyone a gift, have a party, nothing. Just eat a corn dog and be happy you had an excuse to do it—or don’t.