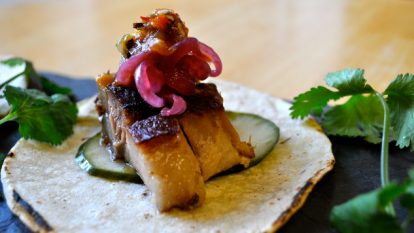 If you look up “Filipino and Thai food” on the internet, search results compare the two cuisines. And apparently, “Filipino food is frequently contrasted with Thai food” and has been called Thai food’s “ugly sister”. This is news to Chef King Phojanakong, who blends Filipino and Thai food at his Kuma Inn restaurant in New York City’s Lower East Side neighborhood. Phojanakong, whose mother is Filipino and father is Thai, grew up eating his parents’ dishes, and so it made sense to open a restaurant that serves both cuisines. “The flavors combined naturally without any—I mean there was no hesitation or anything,” he said. “They just naturally go well together.”

The Philippines and Thailand are north of the earth’s equator and south of the Tropic of Cancer. Their tropical climate influences what and how the people cook, like the generous use of seafood and pork in meals, as well as the cooking style of grilling and frying, said Phojanakong. But the key to their similarity is in the ingredients. Lemongrass is included in the Filipino dishes like the roasted pork Lechon and barbecued Chicken Inasal, while the herb is used often to flavor curries in Thailand. Tamarind acts as a souring agent in both Filipino and Thai soups—Sinigang for the former and Tom Yum for the latter. Fish sauce, soy sauce, chili and coconut milk are other common ingredients and condiments Phojanakong listed. “Although, what proportions you use them and how you assemble them together, the final flavor, the outcome would be different,” he explained. “But when you break down the dish, you could taste the lemongrass on the dish, the garlic, the soy, the fish sauce, but it definitely works well together because they’re in the same section geographically—the same part of the world.”

The Pork Belly Adobo Taco offered at Tito King’s Kitchen—Phojanakong’s new Filipino and Thai restaurant in East Village—demonstrates the concoction of ingredients he mentioned. He described that the pork belly is braised in the style of the beloved Filipino main dish called Adobo in which the meat is marinated with soy sauce, vinegar and garlic. Phojanakong then serves the pork belly on a crispy corn tortilla with pickled onions. The Thai twist is found in the Thai chili lime sauce, a common condiment in Thailand, which goes on the pork belly. Phojanakong added that he makes his Thai chili lime sauce with sugar, garlic, lime juice and fish sauce.

When Phojanakong opened Kuma Inn 12 and half years ago, there was no other restaurant doing Filipino and Thai cuisines, but he named Leah Cohen’s Pig and Khao, which began serving both foods when it opened in 2012. The two restaurants are four blocks apart, but it’s all camaraderie for Phojanakong and Cohen. The chefs have eaten at each other’s restaurants, Phojanakong shared, and they’ve cooked together for a special Filipino Fiesta night hosted at James Beard House in Greenwich Village back in 2013.

Cohen clarified that Pig and Khao isn’t Filipino and Thai fusion, but the restaurant is very much influenced by their food cultures along with other Asian countries including Malaysia and Vietnam. After appearing on Top Chef, Cohen spent a year traveling to Southeast Asia, specifically to Thailand and her mother’s homeland the Philippines. During her travel, she ate at local restaurants and studied the cooks’ techniques and flavors. “Everything I learned on my travels is in some way shape or form translated to the food that we do at Pig and Khao,’ Cohen said.

One look at Pig and Khao’s menu it is noticeable where Cohen has traveled. She has her own Pork Belly Adobo that is marinated in the same ingredients but instead topped with a slow poached egg. Crispy Pata, Chichen Inasal, Seafood Sinigang and Sizzling Sisig are among the many dishes on the menu that would be familiar to Filipino diners. For Thai diners, there are the red curry Khao Soi, Green Papaya Salad and Grilled Pork Jowl (Ko Mu Yang). “I would say a lot of people still don’t know what both authentic Thai and Filipino food is supposed to taste like,” Cohen said. “Hopefully people understand it a little better after eating at Pig and Khao.”

2015 has been a banner year for Filipino cuisine. In April, the Washington Post declared that it finally arrived in the culinary scene. The following month, New York City held its first Filipino Restaurant Week with 13 Filipino restaurants in participation—a sign of the burgeoning Filipino restaurant community in the city’s Lower Manhattan, Brooklyn and Queens neighborhoods. TheNew York Times also has written few pieces on Filipino food this year—from the Philippines version of meatloaf called embutidos to award-winning Filipino restauranteur Nicole Ponseca to new Filipino restaurant openings.

But Filipino food has yet to reach the masses. So can the popular Thai cuisine help bring attention to Filipino food and intrigued diners who may not be familiar with Filipino food, let alone know the origin of the cuisine? Phojanakong said that a restaurant just won’t do it. For starters, people need to get acquainted with the Philippines and its culture, and the country’s Department of Tourism can help make it happen. He added that once the people know of the Philippines, the food will then follow.